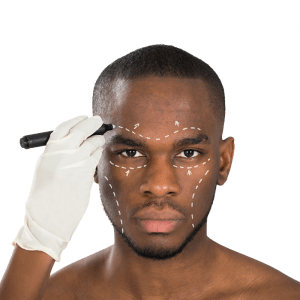 A weak chin is often also referred to as a receding chin, and it is when the lower jawbone is pushed backwards or underdeveloped. The result is a chin and jawline that looks as though it leans in towards the neck. A weak chin is less pronounced and defined, and in some cases, it makes the face appear unbalanced. The chin often appears shorter or smaller which can cause the upper lip to look as though it is protruding.

Weak chins are often caused by a genetic trait where there has been an insufficient frontal projection of the bone of the chin or chin pad. A congenital disability can also be the cause or a weak chin which is where the chin simply hasn’t properly developed. A receding chin can also be the result of direct trauma or injury to the lower jawbone.

A weak chin can affect anybody, and for some, it is just a normal part of their appearance. However, some people with severe receding chins could have problems related to speaking or eating. For some, a weak chin can affect their self-confidence and increase self-consciousness, as a strong chin and jawline are often portrayed as an attractive feature.

When it comes to treating a weak chin, there are various treatment options to explore. At Hans Place Practice, there are a range of treatments that our specialists recommend;

Dermal fillers are an increasingly popular procedure which can be used to help fix a weak chin. They use a clear gel which is nearly identical to hyaluronic acid, which the body produces naturally. This gel works with the body’s hyaluronic acid to plump out targeted areas, such as the chin and jawline.

Click here to find out more about dermal fillers.

VASER Liposuction uses ultrasound technology to reshape specific areas of the body, such as a weak chin. It is a one-off treatment that can be used to resculpt the chin area and uses state-of-the-art technology to give results similar to traditional liposuction.

Click here to find out more about VASER liposuction.

Renuvion offers toning and tightening results without the need for invasive surgery. It is a minor surgical treatment that involves a Renuvion wand being inserted using small incisions in the skin. This applies radiofrequency energy to the weak chin area and encourages natural collagen production to instantly firm skin.

We understand that finance is often a deciding factor when it comes to undergoing Cosmetic Surgery or treatments. At Hans Place Practice we are able to offer finance solutions with manageable payments to suit a variety of budgets.